The brigands in Maremma and the story of Domenico Tiburzi

The stories of the brigands were a tradition of the long Maremma vigils, handed down "by heart"
.... and everyone added something of their own!
In reality, the brigands were nothing but peasants and shepherds hardened by misery. Strong and resistant, capable of surviving the life of "maquis", in continuous flight, accomplices and victims of unjust justice.

Causes of brigandage in Maremma

Even today when we talk about bandits, myths and legends are told. They belong to the Maremma culture. Somewhat banned, some modern Robin Hood. The injustice of the laws and the poor distribution of goods in society has meant that in times of greater oppression the myth of the brigand has been strengthened.
The brigandage in Maremma even began in the thirteenth century, although its greatest expansion occurred in the mid-nineteenth century and owes its end in the early twentieth century, with the killing before Tiburzi and finally Fioravanti, the last brigands .

Several factors have influenced the phenomenon of brigandage in Maremma:

The honorable Giuseppe Massari, Cavour's secretary in the crucial years of the unification of Italy and deputy to the subalpine Parliament who was charged with drafting a "Report on the causes of brigandage" presented to the Chamber in 1863, defined the phenomenon of brigandage as "the savage and brutal protest of misery against ancient and secular injustices ", linked to the existence of the great Maremma estates and social tensions.
It is no coincidence that the most serious episodes of violence occurred against the wardens, gamekeepers, factors, carabinieri and other representatives of the employers' power and the state.

The robbers have now lost the aura of mystery that surrounded them, they have become ... ... over the counter!
There is no restaurant in Maremma that does not have an image of Tiburzi somewhere: the label of a bitter, a wine, even a cheese, obviously a BLACK pecorino! 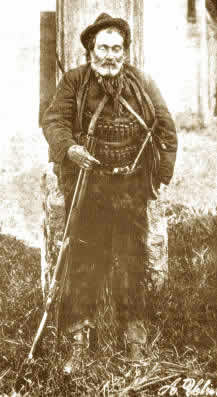 Dressed in rough dark cloths, the rifle in his right hand, the double cartridge belt around his waist, the hat on the back of his neck, his eyelids held open by invisible sticks, a disturbing expression…. absorbed in the mystery and rigidity of death.
Yes, because this is the image of Tiburzi corpse! It was photographed by the carabinieri after they had been killed near Capalbio on the night between 23 and 24 October 1896, linked to the ruin of a Roman column and starkly exposed to the public.

But who was Domenico Tiburzi? Without doubt the most famous of the Maremma brigands. Born in Cellere on May 28, 1836, he was nicknamed "Domenichino" because he barely reached 1.60 meters in height. The figure of Tiburzi is a real legend in Maremma, in a certain sense he was, for the poor people, a sort of hero who protected the rights of the weakest.
In 1867 he committed his first crime by killing Angelo Bono, the guardian of the Marquis Guglielmi, for having fined him twenty lire, a mistake for those times, only for having collected a bundle of ears in the marquis' camp.
And so begins his story as a robber who, of course, will end badly. The day will come when the gentlemen, the ones who had often been armed, and who had also paid him for years, wanting him killed.

According to tradition after his death, the parish priest of Capalbio declared his opposition in burying a brigand like him in consecrated ground, but the population who saw him as a savior rose up, and thus came to the compromise of burying him under the walls, with legs inside the cemetery and the upper part outside, to symbolize the soul left outside and without any cross or tombstone. Today the traces of the original gate have been lost, but the Capalbio cemetery has grown over the years and the body of Tiburzi, today, is totally in consecrated land, so after receiving absolution from the people it was the time to decree complete acquittal. The wooden plaque that recalls his date of birth and death, is placed on the ancient Roman column where, after his death, the brigand was tied up and photographed.

The singular story of the robber Tiburzi was told in a 1996 film directed by the director Paolo Benvenuti.
In an interview back then, in the portrait that Benvenuti traces the brigand, there is a truth that surpasses the legend that is told for the first time in the film:

"... Tiburzi had understood at some point in his life that in the power vacuum in Tuscany he has the right tools to keep the territory clean from violence and robbers, going around the landowners and getting paid by them, naturally interested in maintaining the order. A very advanced idea, but to understand the Tiburzi man just remember that when he was arrested the first time he could have escaped immediately, but he remained in prison for two years because he wanted to learn to read and write. Tiburzi like the bandit Giuliano, able to force the laborers not to go on strike. And with a deep sense of popular justice, the great old righteous one to turn to to solve every problem, country brawls and family disputes. It was a job to which he devoted himself with great rigor and everyone listened to him. It is no coincidence that the legend of Tiburzi survives and still resists today, in a time when popular heroes last the space of a television popularity ......... Tiburzi's story is divided into three parts. The protagonist of the first part is the investigation by the carabinieri, in the second part there is nature and in the third part the myth, Tiburzi awaiting death, returned from his golden refuge in France, where the landowners of the Maremma had sent him, because he was terribly bored. He had become a middle-aged man with no history, and rather than dying of nostalgia he preferred physical death. "

There is a poem-song, a story from old storytellers, in the Welcome film. A woman dressed in black sings it, impersonating the chorus of ancient Greek tragedies by herself, in which Destiny tells and comments on the story of human characters, always unfortunate.

The phenomenon of brigandage was only one of the evils of the Maremma. The other was malaria ......

Exciting to be in the presence of this millennial tree, among the oldest in Europe. A real green monument. The olive of the Witch The...