The writing placed on the entrance gate: "Hic Terminus Haeret", "Here the boundaries adhere", alone, presages what you will find inside the garden: let every mental barrier fall and enjoy the sensations you will feel. 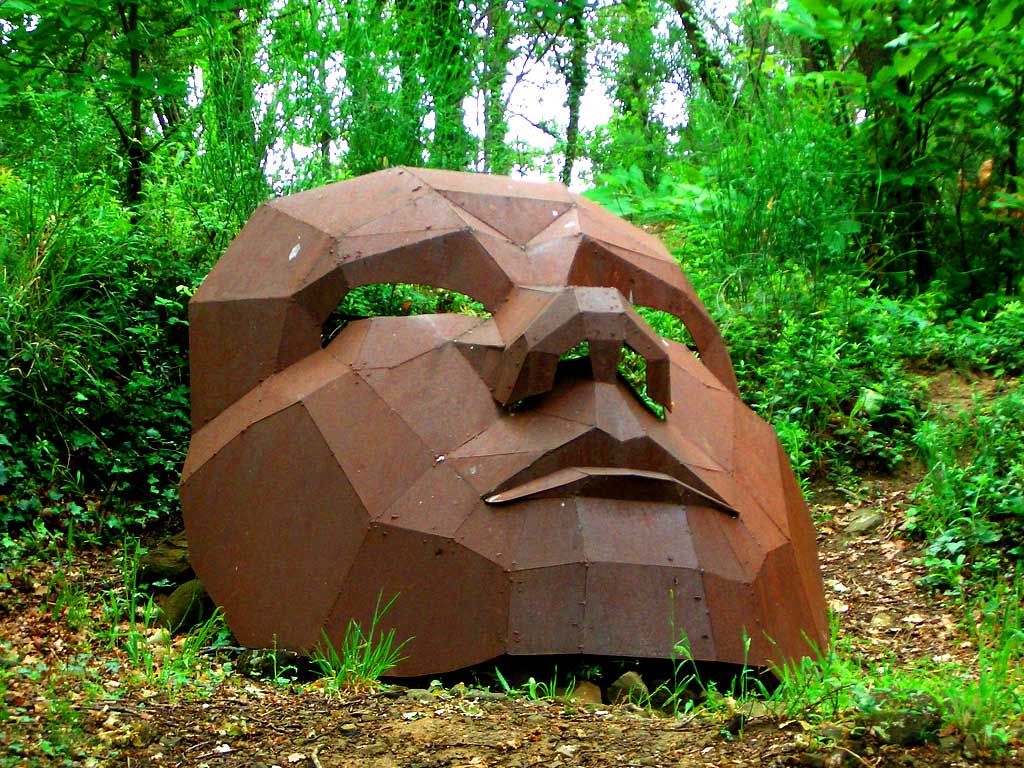 Spoerri's garden is an open-air contemporary art park. It was built in Seggiano, a small village on the slopes of Mount Amiata, in the early 90s. A hundred works by 55 different artists as well as by Daniel Spoerri are on display today, but the garden is constantly evolving. Since 1997 it has become a foundation: a meeting point for creative minds. The 16 hectares of land represent a constant dialogue between nature and art.

The garden is located on grassy terrain with slight slopes, the path is well accessible. The visit lasts about 3 hours. There is no obligatory itinerary as the works are not intimately linked to each other, but with a map in hand and the sequence indicated by the guide you will manage not to miss even a sculpture.

Your kids will have a lot of fun! Let them wander among the works…. grass sofas, fire-breathing dragons, dwarves and warriors, gigantic drummers followed by 160 geese and the particular "labyrinth". 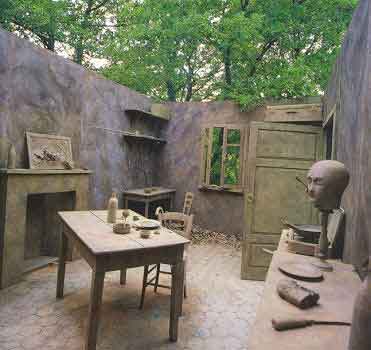 But the most suggestive work is certainly the "Chambre n. 13 de l'Hôtel Carcassonne Paris (1959-65)". 5 tons of bronze! It represents the interior of the Parisian room in which Daniel Spoerri's artistic adventure began. An "enchanted" room where everything seems to slip due to the double inclination of the ground and the work. It is the first of the tableaux-pièges (trap-traps) of Eat Art, the current of which Spoerri was the inventor and initiator in the late 1960s.

The park can be visited from Easter to October. From November to March by reservation only.
For all detailed information here is the link of the park: danielspoerri.org

Spoerri and the Eat Art

Born March 27, 1930 in Galati, Romania. After the death of his father, at the age of 12, he moved with his family to Zurich in Switzerland. Dancer, painter, choreographer, sculptor. It owes its fame as an artist especially to the so-called tableaux-pièges, made starting from the sixties. Inventor of Eat Art in 1967. The artist has a real passion for kitchen tools and assemblies of food utensils. His intention was to start a critical reflection on the fundamental principles of nutrition, to celebrate the rituality of everyday life and the uniqueness of each meal.

The vertical tables are paradoxical works: from the ritual of feeding, they end up deteriorating before the eyes of the spectators. For Spoerri Food, life and death have a close relationship and so he tried to represent it.

Who better than Daniel Spoerri himself can define his trap-paintings:
“Objects found randomly in situations of disorder or order are fixed to their support exactly in the position in which they are found. The only thing that changes is the position with respect to the observer: the result is declared a picture, the horizontal becomes vertical. Example: the remains of a breakfast are attached to the table and, together with the table, hung on the wall (...) My trap-paintings will have to provoke inconvenience, because I hate stagnations. I hate fixations. I love the contrast produced by the fixing power of objects, I love to extract objects from the flow of constant changes and their perpetual possibilities of movement; and this despite my love of change and movement.
One last thing. Do not look at these trap-paintings as art. They are rather a kind of information, of provocation, they direct their gaze towards regions to which generally no attention is paid, that's all. "

Are you looking for accommodation near Daniel Spoerri's Garden?

Festambiente is the most important national event with zero impact of Legambiente. The party was born in 1989 and is held in the month...

The Maremma regional park is better known as Uccellina park, from the name of the small mountain range that overlooks it. It extends for...

The pink flamingos of the Orbetello lagoon

The pink flamingos, coming from the French region of the Camargue, come to spend the winters in the Orbetello lagoon. When to see the...

Natural reserve of the WWF of the lagoon of Orbetello

The Orbetello lagoon is home to one of the oldest reserves of WWF Italy. Thanks to its position along the migratory routes, it is the...

The vicious butterfly of Capalbio

In addition to a large number of VIPs, there is also a beautiful butterfly that has chosen to live in the Argentario and in the...